The Monthly Big Picture is a PESTLE analysis to give you a snapshot of WAI social network landscape over the last month. Today we take a look at Society and Technology (part 2 of 3).

Society – JLM’s questions at the dawn of the “breakthrough decade” 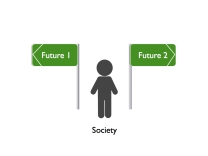 The Economist reported on an artistic initiative led by Jennifer Lyn Morone, who has “incorporated” her entire body to estimate its value in a data-driven economy. JLM Inc is a derival from Jennifer’s biological, mental and physical services. Ms Morone will store and monetize data generated on her own servers, using a bespoke solution called the Database Of Me (DOME). This unexpected artistic experience is a question mark to the place of human being in data and vice versa. Although clearly an extreme, there is a sense in trying to better define where the fantastic tools we are currently developing will land us. Especially as the coming decade, the “Breakthrough decade” as labelled by scientists, seems to be an “all or nothing” one. As quoted from Alex Steffen’s tweet in the article from CSwire, “what happens in the next 40 years (is) critical. What happens in the next 10 years sets the range of what’s possible.” Big data has a role to play, but what’s going to be ours?

Technology – A muscled robot and a mission to Mars

Researchers of the University of Illinois have created flexible robots made of jelly-type material, that come into a muscle-like texture to move more easily, as LiveScience have found out. These robots are believed to enable a great deal of innovation for operations, reparations or construction, as researchers point out. This tiny 3D-printed “bio-bot” is a sign that a significant advance is being taken both on engineering and production, with a lot of opportunities opened by a myriad of motions that weren’t possible to reflect with previously used materials. While those advances take place in the tiny 0.2 inches of infinite science these bio-bots represent, technology also allowed us to travel beyond imagination in space and time last month. It is now foreseen that the first mission to Mars could take place in 2026, as Sploid explains. Some vehicles already designed or to be created are presented in the article, together with the view of Elon Musk, who wants to build SpaceX spaceships that will be able to “save humanity”.